Again-Again! is a Teletubbies video. It was released in 2004 by BBC and Ragdoll Productions.

​ Special Features for US Version 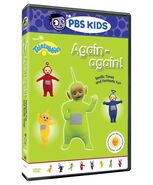 US Disc
Add a photo to this gallery
Retrieved from "https://teletubbies.fandom.com/wiki/Again-Again!?oldid=65419"
Community content is available under CC-BY-SA unless otherwise noted.