Start a Wiki
Dipsy is the second Teletubby with an antenna that refers to a dipstick because of his name.

Dipsy's skin tone is slightly darker than the other Teletubbies, implying that he is black. He is jolly and likes talking to himself. He wears a white hat with black cow spots.

Dipsy is 8 feet tall and is green. He calls his hat "Dipsy 'Hat" which is how a toddler would say "My Hat." Dipsy is quite stubborn, sarcastic, and contemptuous, and will sometimes refuse to go along with the other Teletubbies' group opinion. He once lost his hat but Laa-Laa found it. He is the second oldest Teletubby after Tinky-Winky and he is quite intelligent and mature. He often hangs out with Laa-Laa and Tinky-Winky and is played by John Simmit in the original series and Nick Chee Ping Kellington in the new series.

He enjoys playing fun games with the other Teletubbies. In most of the episodes, he can be seen wearing his hat while playing with Tinky Winky, Laa-Laa, and Po while doing any activity they are doing in Teletubbyland. In some episodes, he sometimes plays by himself when nobody is around. 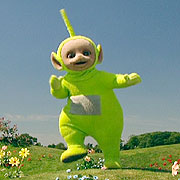 Dipsy with a piece of tubby toast. As seen in Feeding the Chickens. 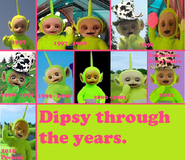 Add a photo to this gallery
Retrieved from "https://teletubbies.fandom.com/wiki/Dipsy?oldid=52845"
Community content is available under CC-BY-SA unless otherwise noted.