Start a Wiki
Favourite Games is a Teletubbies PC game for children aged 2-4. It was released in 1999 by Ragdoll Productions and BBC Multimedia (Knowledge Adventure US Game Version only).

There are five activities to play in this game:

The game begins like the intro in the TV series. The Sun Baby rises over some hills. Then the house is shown and you hear 'Over the hills and far away, Teletubbies come to play'. Then one by one, the Teletubbies pop out of the hole at the top of the house and the Teletubbies logo appears. Then when the logo bursts, the Menu appears.

When you click the exit button, the credits will appear as there is no Tubby Bye-Bye.

Along the way when your rolling down the hill, you can stop to look at objects from episodes that appear from far away. These objects include

Three pairs of colourful curtains appear from far away. The Teletubbies play a Hiding Game with the curtains. The idea of this game is to hide three Teletubbies and the remaining Teletubby has to find one of them.

This activity starts with the windmill spinning, the Teletubbies run up to a hill for the TV Event segment like in the television series. Each Teletubby's aerial lights up and the windmill keeps spinning. You can choose a Teletubby and watch a video from that Teletubby's Tummy. There are five videos you can watch:

Each video has a mini activity you can play. 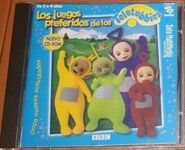 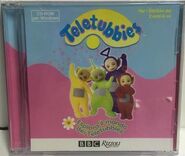 Polish cover
Add a photo to this gallery
Retrieved from "https://teletubbies.fandom.com/wiki/Favourite_Games?oldid=54401"
Community content is available under CC-BY-SA unless otherwise noted.