Start a Wiki
Making Flowers is the tenth episode of the series. It first aired on 11th April, 1997. A watering can appears in Teletubbyland. Laa-Laa finds it and she waters some flowers who say 'Lovely water!'. Then a voice trumpet rises up and sings the nursery rhyme 'Mary Mary quite contrary'. Laa-Laa has fun watering flowers. Then the Magic Windmill starts spinning, so the Teletubbies watch some children make some flowers out of paper.

Laa Laa finds the watering can. 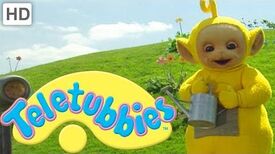 Teletubbies - Making Flowers
Add a photo to this gallery
Retrieved from "https://teletubbies.fandom.com/wiki/Making_Flowers?oldid=60401"
Community content is available under CC-BY-SA unless otherwise noted.