Noo-Noo (operated by Mark Dean (from 1997 - 2003, 2007) in the original series and Victoria Jane (from 2015 - present) and Olly Taylor (from 2017 - present) in the new series) is the Teletubbies' sky blue pet, as well as their housekeeper and guardian. He lives in Teletubbyland as a vacuum cleaner. Noo-Noo never leaves the house in the original series. He doesn't speak as the Teletubbies can, and instead makes sucking and slurping noises. He has a long elephant-like nose which he uses for tidying up. He can also stretch his hose for reach. He also has a big pink light at the back of him. Noo-Noo gets annoyed with the Teletubbies' antics at times or too excited and he can therefore tidy up their food or favourite things. The Teletubbies shout 'Naughty Noo-Noo.' and chase him around the house. The chase usually ends with a Big Hug. Noo-Noo has a brush on top of him that is also detachable. It is extremely rare for his brush to be detached. It is only seen detached in the episode Swans and the video Big Hug!.

Dipsy borrowing his brush to clean off the crumbs

Blowing out the decors and hangs them with a sneeze

The Teletubbies chasing the Noo-Noo while circling the control panel

The big pink light on the back 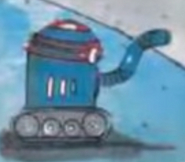 Early concept art of the Noo-Noo

With a voice trumpet near the playroom

Community content is available under CC-BY-SA unless otherwise noted.
Advertisement