Photo Faces is the 12th episode of the original series. It first aired on 15th April, 1997.

Tinky Winky, Dipsy and Laa-Laa go running along the hills and say 'Eh-Oh'. Suddenly Po pops up and says 'Boo! Eh-Oh!'. The Magic Windmill spins and the Teletubbies go off to watch some children taking photographs of each other's faces. Later in Teletubbyland, a telescope appears and Dipsy has a good look around. He sees flowers, rabbits, trees and the house. Dipsy then hears some noises and looking through the telescope, he sees Laa-Laa playing with her ball, Tinky Winky opening and shutting his bag and Po smelling some flowers. After that, he sees the Teletubbies having a big hug so he rushes off to join in. The Magic Windmill starts to spin and the Teletubbies watch the Magic Tree. The Magic Windmill stops spinning and it's time for Tubby Bye-Bye.

Tinky Winky, Dipsy and Po have fun saying 'boo!' by popping up around the house. They then watch some children taking photographs of each other's faces. Later in Teletubbyland, a chair appears and Laa-Laa, Dipsy, and Tinky-Winky have fun standing up and sitting down. Then the Teletubbies do the Bumping Dance before Tubby Bye-Bye. 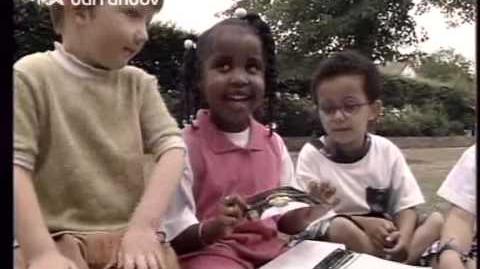 Teletubbies - Photo Faces (US Version)
Add a photo to this gallery
Retrieved from "https://teletubbies.fandom.com/wiki/Photo_Faces?oldid=65824"
Community content is available under CC-BY-SA unless otherwise noted.