Po is the fourth and youngest Teletubby. She lives in Teletubbyland with the other Teletubbies.[1]

Po is a red Teletubby with an antenna shaped like a wand used for blowing bubbles. She is the smallest of the Teletubbies. Po is 6 feet 5 inches tall and is played by Pui Fan Lee (from 1997 - 2003, 2007, 2009) in the original series (Rachelle Beinart (from 2015 - present) in the new series). In addition to being a popular presenter, Lee is a British actress of Chinese descent who lent to Po her ability to speak Cantonese in addition to English. Po means "wave" in Cantonese. She is always heard to shout some words in Cantonese such as "Fi dit!" for "Faster!" and, sometimes, "yāt, yih, sàam!" for "one, two, three!".

Po's favourite object is her blue (orange in reboot) and bright pink scooter, which she calls "Po cooter!" or just "cooter," which is how a young child would say scooter. She spends most of her time riding her scooter. Po often wants attention and is often silly when she misunderstands the commands of the Voice Trumpets. She can be very silly, but she is also very clever, a tomboyish type, and of all the Teletubbies, she is the one who usually becomes most involved with the audience. She loves attention. In the Teletubbies' house, she sleeps on the right side of all the other Teletubbies. Po is also a bit timid, and a little less talkative than the other Teletubbies. She likes cute stuff and often hangs out with Tinky Winky and Laa-Laa.

Many refer to Po as a Male, usually due to Po being red and for her tomboyish antics, but Po is played by a woman and is actually Female. Po's gender pronouns have been referred to as She/Her in every episode. 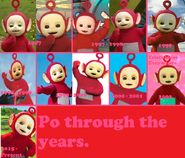 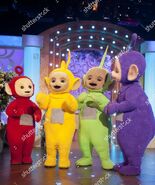 Po, Tinky Winky, Dipsy and Laa-Laa with Holly Willoughby and Phillip Schofield on This Morning.

Po, Tinky Winky, Dipsy and Laa-Laa with Katherine Jenkins on the set of This Morning.

Po, Tinky Winky, Dipsy and Laa-Laa on Britain’s Got Talent

Community content is available under CC-BY-SA unless otherwise noted.
Advertisement