Start a Wiki
See-Saw (also known as See-Saw Margery Daw) is the 11th episode of the series. It first aired on 14th April, 1997.

The Teletubbies go down the slide inside the Home Hill. The Magic Windmill starts spinning and they rush outside to watch some children dancing to King Pleasure and The Biscuit Boys playing See-Saw Margery Daw.?

Later, the Teletubbies watch Po trying to go up on the slide but she keeps sliding down a few times. The Magic Windmill starts spinning again, and the Teletubbies rush outside again to watch the Magical Event. A Lion and Bear play hide and seek in Teletubbyland.

Then the Teletubbies go to do the Walking Dance. Afterwards, they see the Magic Windmill stop spinning, the Teletubbies say 'Uh Oh!' and run away as it's time for Tubby Bye-Bye 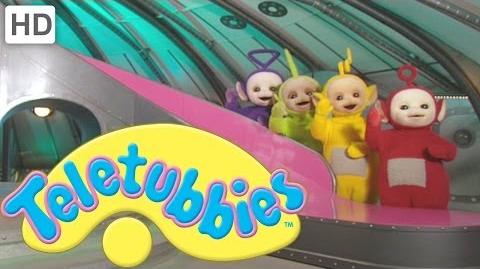 SeeSaw Hebrew
Add a photo to this gallery
Retrieved from "https://teletubbies.fandom.com/wiki/See-Saw?oldid=65390"
Community content is available under CC-BY-SA unless otherwise noted.