There are lots of toys in the Tiddlytubbies play area. Lots of the toys are the same colour as the Teletubbies and have their aerial shapes on them. The toys include:

There are other toys usually seen in the background, but the Tiddlytubbies are rarely or never seen playing with them. These include:

Baa on the swing 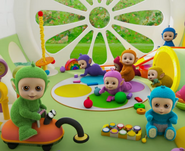 Add a photo to this gallery
Retrieved from "https://teletubbies.fandom.com/wiki/Tiddlytubbies?oldid=61184"
Community content is available under CC-BY-SA unless otherwise noted.