The Tubbytronic Superdome (also known as The Dome or The Hill) is a home of the Teletubbies.

It's a grassy dome-shaped house with 2 pairs of doors at the front and back of the house. There are also 4 windows. There is a hole on the top connecting to the pink slide that the Teletubbies can go up and down. Inside the house is a table where the Teletubbies have their Tubby Custard and Tubby Toast. There is also a control panel with colourful buttons and levers that make animal noises and funny sounds when pressed or pulled. The control panel also contains the Tubby Sponges. There are also 2 doors on each side of the entrances/exits of the house, but it is unknown what's inside them. Although people still think about what is inside them, they are just a decoration

In the programme, it is always referred to as just 'the house' or 'home'. the film crew would refer to it as the Dome.

In the reboot, the outside almost remains the same but now has flowers and lumps on it. The doors and the windows are yellow and the small tunnel leading to the doors is gone.There are now six windows instead of four, and the back door has been turned into a window inside the Tiddlytubbies play area. The hole on top of the house now has a ring around it. While the inside has been completely redesigned. It is no longer futuristic and made out of metal, instead, it is now pink and yellow and has white walls which seem to be made out of inflated material. The slide is also gone and has been replaced with a lift called the Dup-Dup.

It also has a grass floor and four orange beds, each with blankets and pillows that match each Teletubbies' colour. The Tubby Custard Machine has been redesigned into a train-like ride so that the Teletubbies can ride around the house and outside in Teletubbyland. In addition to this, it has a Tubby Phone on the control panel and a playroom where the Tiddlytubbies play. These redesigned sets make the 2015 series seem less canon to the original series.

The outside of the Tubbytronic Superdome in Big Hug!

The Teletubbies sleeping in their Tubby Beds.

The outside of the Tubbytronic Superdome in Busy Day.

The Teletubbies sitting at the Tubby Table with some Tubby Toast.

The Slide that is connected to the hole at the top.

A rare view of the Tubbytronic Superdome

The window behind the Tubby Custard Machine in the Tubbytronic Superdome with the Magic Windmill outside.

Start of construction of the Tubbytronic Superdome 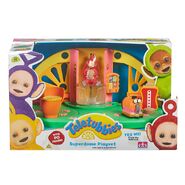 2015 playset
Add a photo to this gallery
Retrieved from "https://teletubbies.fandom.com/wiki/Tubbytronic_Superdome?oldid=70958"
Community content is available under CC-BY-SA unless otherwise noted.