Happy Christmas from the Teletubbies

Uh-Oh! Messes & Muddles, retitled Funny Day in American releases, is the fifth volume in the Teletubbies VHS series. It was released in 1998 by BBC and Ragdoll Productions and 1999 in the US by PBS.

There, all tidy! (From Washing Up)

Painting with Hands and Feet

The Ball of String (From Amy's Pasta)

The Singing Man in the Pink House (Bottom left window) 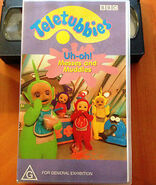 US Cover (Funny Day)
Add a photo to this gallery
Retrieved from "https://teletubbies.fandom.com/wiki/Uh-Oh!_Messes_%26_Muddles?oldid=59705"
Community content is available under CC-BY-SA unless otherwise noted.